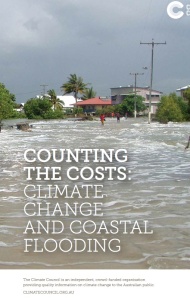 A new report by the Climate Council warns that rising sea levels and coastal flooding are likely to place coastal infrastructure worth up to $226bn at risk.

The report, titled Counting the Costs: Climate Change and Coastal Flooding, notes that Australia is highly vulnerable to increasing flooding because our cities, towns and critical infrastructure are mainly located on the coast.

The authors point out that the nation’s infrastructure has been built for the climate of the 20th century and is not prepared to withstand rising sea levels. They warn that Sydney is particularly vulnerable to sea level rise, as flooding that now occurs once in a hundred years could occur every month.

The authors describe coastal flooding as a ‘sleeping giant’ and state that if the threat is ignored, ‘the projected increases in economic damage are massive’.